The reasons to make the switch to led lights

Led lights have already dominated the markets and as the led technology expands. More and more people are appreciating the benefits of LED lighting that’s replacing the old fluorescent tubes.

One advantage of using LED tubes is that it’s cost-effective. You will be able to not only save money but also replace the fluorescent tubes after the 50,000hrs rated life.  This is important since many of us already have them in the home and the potential uses for businesses are increasing. Therefore the need to save energy costs is greater.

LED tubes have a real impact on the environment and are energy efficient. About 21% of all power consumed by commercial sectors is used for lighting. Significant amount of lighting is being released by fluorescent tubes. Switching to LED tubes instead would cut this energy usage significantly. As 95% of energy for light and only %5 is wasted on heat. They are made from non-toxic materials, unlike fluorescent lighting that uses mercury that harm the environment. Making them more Eco-efficient by reducing greenhouse gases.

Fluorescent LED tubes work in most temperatures and are able to withstand vibration, shock and extreme temperature. Unlike the traditional fluorescent tube which can on occasion not light up if the temperature is too low.  Fluorescents will begin to buzz and flicker nearer the end of their life time. Fluorescent LED tubes do not do. Improved safety may also be their most important benefit as no heat is released and thus reduces the potential for burns and fires.

At SONICA LED we offer a range of LED tubes with waterproof diffuser fixture or standard led battens. They are available in both Warm White (3000k) and Cool White (4000k)  in either 2ft, 3ft, 4ft or 5ft T8 lengths. Available for collection (Hull city centre, Hu1 2pa) or free delivery above £34.99

LED’s are rapidly becoming the preferred lighting solution and overall have a better quality of light distribution. As the growing demand of these lights continue to escalate. More people will be able save their money and make a difference to the planet.

What you need to know before purchasing an led floodlight

What is a led floodlight?

LED floodlights are artificial lights used to illuminate light in outdoor areas. They can be used for security reasons too, available with pir sensor. They are far more efficient than generating light appliances.

In comparison to standard light bulbs which produce a huge amount of heat which is converted from energy. LED floodlights have minimal heat emission and so do consume less energy. But still able to produce the maximum amount of light. This also makes it quite long lasting as they last longer than fluorescent lights. And built to last around 50,000 hours benefiting of having minimal replacement. As a result of its durability and strength, you will rarely need to replace it. Advantage to you as it means it will be more cost-effective. LED floodlights it will also be helpful for the environment as they do not contain any hazardous.

How bright do LED floodlights need to be?

The brightness of LED floodlights depends on the location of where they will be situated. For example if it will be placed in a parking area. it’s recommended to have 2 of them 15-20 feet high at 20,000 lumen. Floodlights is most accurately measured with lumens instead of watts and it’s typically said that 100w is 13,000 lumen.

What is the difference between a floodlight and a spotlight?

A floodlight can produce beams of light that cover a large amount of space up to 120 degrees whereas with spotlights.  They can only produce a narrow beam of light no wider than 45 degrees and the point of contact is more direct.

Floodlights have a larger beam angle so they will have a wider spread of light so it all depends on the location of where you want your light. LED floodlight will be recommended because it covers the most surface area. If you want light to be illuminated from garage doors or in gardens, spotlights will be used as the light is more focused. Also, as spotlights are relatively smaller than floodlights, it would be more suitable.

If you want to purchase floodlights for security reasons,  additional sensors can be built in and motion sensors can be beneficial as it will turn on only when someone is walking by. But with these sensors, angles and positioning need to be considered  and the detection distance needs to be taken into account. Determined where the floodlight will be placed. You have to make sure that before installing, the electrical supply is switched off. Drill holes need to be marked and wires need to be placed in before electricity can be switched on.

What is the cost of LED floodlights?

Depending on the wattage they usually range from £5 to £100. You can order online or collection from our branch which is located in Hull city centre, 24 Anlaby road. HU1 2PA.

Here at SONICA LED we offer LED Panels at market leading prices. We have develop led lighting products that gave the greatest output of energy with the ability of saving power effectively. Also had the aim of selling products moderate in price. Fluorescent tube-lights have always been used in areas where lighting is a necessity. These lights we’re promoting provide a substitute for these traditional lights which are suitable for for most places.

Due to high demand, it has encouraged us to increase our LED Panel Range. We currently now have many models which come in different sizes, including, 600×600, 1200×600 and 1200×300. They all have a contemporary and elegant design with a high light transmission rate. They can be dimmed by using a dimmable LED Driver. We can also supply an emergency led driver with will back up your light for 3 hours, vital for commercial environments. We have received 95% positive feedback, with reviews complimenting the fast delivery.

Our standard 45W LED panel light is a perfect swap for a 150W fluorescent, commonly used in the UK. Latest LED technology delivering a brighter light with less energy. Also environmentally friendly as they have no lead or mercury content. We are a brand that offer a selection of colours 2 colours (Day white or Cool White).

Our further developed LED panels in comparison with incandescent can save over 80% electric cost. While still environmentally friendly. SONICA LED’S High Lumen panels were consuming  less power and saving more electricity. We highly assure you that these panels are efficient. helping lower the electricity bills. Using less panels will be needed and still sufficient standard lighting will be achieved. SONICA LED’S High Lumen panels come in with a five-year warranty.

LED Fluorescent tube lights had entered the industrial industry many years ago and thanks for their cylinder design. They have been able to produce the best quality light in comparison to the incandescent bulbs. The LED technology expanded and with LEDs. Their distribution of light is much more efficient as they require less energy to power and in contrast to incandescent bulbs.

The benefits of LED tube lights?

They can last up to 50,000 hours and most LED fluorescent tubes come with a 5 year warranty which means long term wise they will help practically. The main reason why LED lights are used is because they are energy efficient. Replacing your old fluorescent light you would be saving electricity. For example it was found in comparison to a halogen lamp they save 75%  electricity. Lifetime is not shortened as a result of installation method and can be replaced whenever. With most lights they flicker and take around 3 minutes to reach maximum light output. Whereas with LEDs one benefit is that there is no risk of triggering light flickers. Led tube lights turn on instantly and have immediate light. Another benefit, is that they are durable which means they will be less susceptible to damages.

Led Fluorescents do not contain any harmful environmental pollutants such as mercury which will be harmful to the environment. And as they do not contain any toxic elements. When they are disposed In landfill sites they will not contaminate the environment. They are also shock and vibration resistant as mentioned earlier. They are easy to install and because they are not made of glass there will be a risk of breakage and injury. LEDs have a long life span around 50,000 life hours and because they are long lasting this will also mean there will be a reduction in carbon dioxide emissions.

After an extensive research on many products form various range of manufactures, we improved our range of LED Flood Lights. We at SONICA have constantly upgrading to supply the perfect models available for our customers. Now in 2021, the concept of a Floodlight has developed vast by toughening it up to such an extent that it is reliable, and are available at reasonable price. Introducing our endless range starting from 10W to 1000W making them useful for customers for different applications (800 lumens all the way up to 80,000 lumens).

All our LED floodlights consume around 70% less power compared to halogen lighting. These are available now at a much cheaper price than the traditional lights and also cut down maintenance with their long lifespan of 30,000 life hours.

Floodlights are a bright light output, high-intensity lights. This lighting option are commonly used in many vicinity where lighting is considered as a fundamental safety precaution. You can save as much as 80% on electricity costs by using an LED. Our range consume less amount of electricity than other lights. These are ideal for car parking areas, warehouse, or even your garden. Our LED flood lights are strong, durable, long lasting and very slim. With the new design being driverless, this reduces the thickness making them more attractive compared to the old bulky look. All our floods still remain stable even in the harshest conditional climate. With an aluminium body and full sealed to IP65 rating this makes it more ideal to buy LED Flood Lights from Sonicaled.co.uk 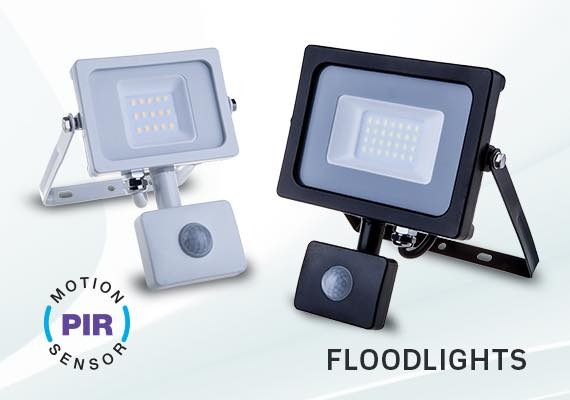